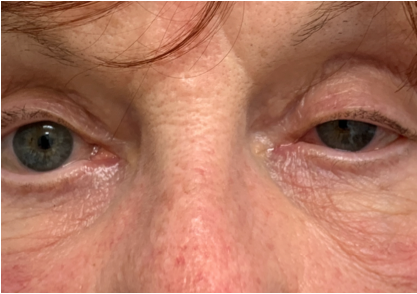 A 73-year-old woman presented urgently with a sudden left ptosis. She noticed it immediately after undergoing parathyroid surgery to remove 3 adenomas the day before. At first, she and her family thought it might have been due to the surgical anesthesia, but when it didn’t resolve the next day, the surgeon directed her to the emergency room out of fear of stroke. At the ER she had a CT scan of the brain which showed no abnormalities.

When she presented for ocular consultation, she had left ptosis and miosis with pupillary dilation lag in dim light. She also mentioned that she had a headache and an ache in her left eye as well. Instillation of 0.5% apraclonidine (Iopidine) elevated her eye lid and dilated her pupil, confirming that she had a left Horner’s Syndrome.

While neck surgery was superficially sufficient to explain her new onset Horner’s syndrome, it did not readily account for her headache and eye pain. Ocular inspection showed no abnormalities to account for her ocular discomfort. Possible carotid artery dissection was discussed, but the patient was resistant to any further intervention and would not go back to the ER as she had been there earlier in the day and maintained that her imaging was normal. Review of the neuroimaging report revealed that she had a CT of the brain to rule out hemorrhagic stroke, but the area of concern in the neck was not imaged. Due to the remote possibility that she may have a carotid artery dissection, she was prescribed 81 mg aspirin daily.

Phone follow-up the next day revealed that she felt much better with her headache and ocular discomfort dissipating. She stated that she had recovered from the physical and emotional exhaustion from the surgery and ER visit. She now agreed to further assessment of her Horner’s syndrome. Magnetic resonance angiography (MRA) of the head and neck was ordered and scheduled. The results revealed that she did indeed have an acute left carotid artery dissection. Upon receiving the results, her aspirin was increased to a full 325 mg daily and she was seen by a stroke neurologist the next day. Her carotid dissection continues to heal and she therapeutically uses 0.5% Iopidine once daily in her left eye for cosmesis as it relieves her ptosis.

Horner’s syndrome is characterized by an interruption of the sympathetic nerve supply somewhere between its hypothalamic origin and the eye.  Clinical findings can include ptosis, pupillary miosis, and, in some cases, facial anhidrosis. Apraclonidine is an alpha-2 adrenergic agonist which stimulates alpha-1 receptors to a negligible degree in a normal eye. A Horner’s syndrome pupil undergoes denervation hypersensitivity with upregulation of both the number and sensitivity of available receptors. When a very weak alpha-1 adrenergic agonist is applied, the hypersensitive pupil dilates while the normal pupil has no effect.   Pupil dilation in suspected Horner’s syndrome is considered diagnostic. Additionally, ptosis also markedly improves with this medication.

Click on the toggles below to read previous case challenges.

An 82 year old man presented complaining of a moderately painful left eye of approximately 2-week duration. He was both diabetic and hypertensive.  He was 20/25 OD and bare light perception OS. His intraocular pressure (IOP) was 23 mm Hg OD and...

END_OF_DOCUMENT_TOKEN_TO_BE_REPLACED

A case of very high pressure A 21-year-old woman was referred for assessment of elevated intraocular pressure (IOP). She did not recall the IOP level, nor did she bring any referral form from her previous doctor. She presented in no acute...

END_OF_DOCUMENT_TOKEN_TO_BE_REPLACED

A 37-year-old woman presented for a glaucoma evaluation and ongoing care. She had previously been diagnosed with glaucoma approximately 3 years earlier and was using bimatoprost 0.01% OU QHS. She had not had any care for the past year. Her visual acuity...

END_OF_DOCUMENT_TOKEN_TO_BE_REPLACED

A 57 year old asymptomatic woman was referred for a glaucoma evaluation due to elevated intraocular pressure (IOP). Her visual acuity was 20/20 in each eye and pupils were normal without afferent defect. Her IOP was 25 mm Hg OD and 24 mm Hg OS. Her optic...

END_OF_DOCUMENT_TOKEN_TO_BE_REPLACED

A 46-year-old woman presented for a scheduled IOP check and visual field as a glaucoma suspect. She had a history of breast cancer 5 years earlier and was using tamoxifen. She reported that she got some cleaning fluid in her right eye 4 weeks earlier. She...

END_OF_DOCUMENT_TOKEN_TO_BE_REPLACED

An 84-year-old African-American man with a history of glaucoma presented for consultation and care. Review of past records indicated that he had also been diagnosed the previous year with dry age-related macular degeneration (AMD) OD and wet AMD...

END_OF_DOCUMENT_TOKEN_TO_BE_REPLACED

A 53 year old man who had been treated for advanced glaucoma presented with slowly progressive, painless vision loss in his right eye. He had missed his visits for the past year, though he had been obtaining medication refills through his pharmacy. His...

END_OF_DOCUMENT_TOKEN_TO_BE_REPLACED

A 25 year old woman was involved in a minor automobile accident where she was hit by another driver. The accident was reportedly minor, with no initial injury to either driver, and both cars were able to be driven away. She felt that she experienced only a...

END_OF_DOCUMENT_TOKEN_TO_BE_REPLACED

Optometric Education Consultants Clinical Case Challenge A 21 year old male plumber called in requesting an urgent appointment. He was working on a job and trying to dislodge a drain coupling by hammering it with the blunt end of a screw driver. He missed,...

END_OF_DOCUMENT_TOKEN_TO_BE_REPLACED

A 47-year-old man presented complaining of gradually decreasing vision and monocular diplopia in his right eye for approximately the past 18 months. He had undergone LASIK vision correction over 13 years earlier with an excellent...