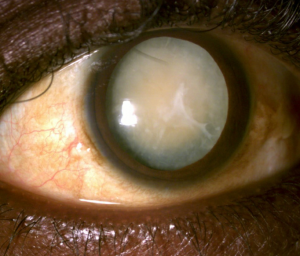 A 53 year old man who had been treated for advanced glaucoma presented with slowly progressive, painless vision loss in his right eye. He had missed his visits for the past year, though he had been obtaining medication refills through his pharmacy. His vision in this eye is Light Perception. A year earlier, it was 20/200 and 3 years earlier it was 20/70 with fixation loss from glaucoma.

His recent vision reduction was due to a hypermature cataract that fully developed in the year between visits.  His intraocular pressure was 14 mm Hg OD and 16 mm Hg OS. He had neither pain nor inflammation and gonioscopically his anterior chamber angles were open and normal. However, with mature and hypermature cataracts, concern must be for phacomorphic and phacolytic glaucoma.

Alternately, upon cataract hypermaturation, the lens cortex undergoes spontaneous lysis and absorption with secondary lens nucleus shrinkage and capsule wrinkling.  This allows internal lens proteins to leak out through an intact though permeable lens capsule.   While the internal lens proteins are the host’s own body tissue, they have never been exposed to the anterior chamber due to their envelopment by the lens capsule.  Thus, when the body detects these internal lens proteins, it interprets them as foreign and antigenic.  Subsequently, a lens-induced inflammatory reaction ensues. This is the phacolytic response.  Macrophages are scavenger cells that attempt to remove lens material and re-establish normal aqueous outflow.

Elevated levels of high molecular weight (HMW) soluble lens proteins can directly obstruct aqueous outflow.  Further, during the uveitic process, breakdown of the blood-ocular barrier occurs with subsequent influx of proteins as well as inflammatory cells. These constituents are considered to have a major impact on IOP elevation as well. Obstruction of the trabecular meshwork by inflammatory cells and proteins, as well as trabeculitis (inflammation of the trabecular meshwork), likely contribute to the secondary open angle glaucoma.

Pupil block angle closure in phacomorphic glaucoma is initially addressed in much the same way as primary angle closure. The inflammatory response in phacolytic glaucoma is initially treated with steroids, cycloplegics, and aqueous suppressants. When lens-induced glaucoma develops, the logical approach is to remove the lens. These hypermature lens conditions develop typically when a patient is deemed a poor candidate for surgery or otherwise cannot obtain or undergo cataract extraction. In the patient presented here, he already had longstanding severe vision loss from advanced glaucoma; thus his developing cataract was never addressed. With no future visual potential in this eye from pre-existing glaucoma, he will be monitored for the possible development of phacomorphism and phacolysis.