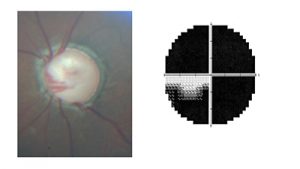 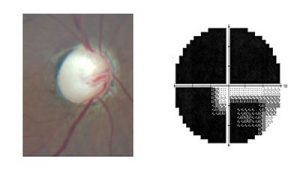 A 37-year-old woman presented for a glaucoma evaluation and ongoing care. She had previously been diagnosed with glaucoma approximately 3 years earlier and was using bimatoprost 0.01% OU QHS. She had not had any care for the past year. Her visual acuity was 20/20 in each eye and pupils were normal without afferent defect. Her IOP was 28 mm Hg OD and 30 mm Hg OS. Her optic nerves were symmetrically cupped at 0.95/0.95 OD and OS with very little rim tissue remaining in either eye. Pachymetry revealed thin corneas at 480 microns OD and 495 microns OS. Gonioscopy demonstrated fully open angles with no abnormalities in either eye. The remainder of her retinal exam was normal save for her advanced glaucomatous optic discs. Threshold perimetry on 24-2 and 10-2 fields were remarkably similar in each eye with not much more than fixation remaining. Indeed, she tended to rely upon her school-aged children to ambulate in the office.

Her peak unmedicated IOP is unknown, but her current level with thin corneas at her stage of disease severity is unacceptable. While glaucoma surgery (trabeculectomy or tube implant) would be the surest way to lower IOP, she runs the risk of losing her remaining vision to surgical ‘snuff out’. Laser trabeculoplasty would have minimal impact in this case.

Her medical therapy was amplified to include generic latanoprost, brimonidine 0.2%, and dorzolamide/ timolol fixed combination. This brought her IOP consistently down to the 09-10 mm range in each eye. She was referred for low vision rehabilitation and mobility training but chose not to go. For over two years of medical management, her visual fields and acuity remained stable. Then her visits became sporadic and she ceased retuning altogether, but refill requests came in from her pharmacy on a regular basis for the next 4 years. All of her medications were refilled when requested due to the harm that would be caused by a denial, but she refrained from scheduling an office visit. She was finally lost to follow up 2 years ago.

When faced with very advanced glaucoma, it is important to remember that if you can significantly lower IOP (by any acceptable modality) and keep it down, patients are not necessarily condemned to blindness and can remain stable.